When done well, QR codes can be very useful for marketing your event or campaign. But there’s a lot of opportunity for misuse with these quick response two-dimensional barcodes originally created for vehicle manufacturing nearly 30 years ago.

Below is an example of good QR code usage: 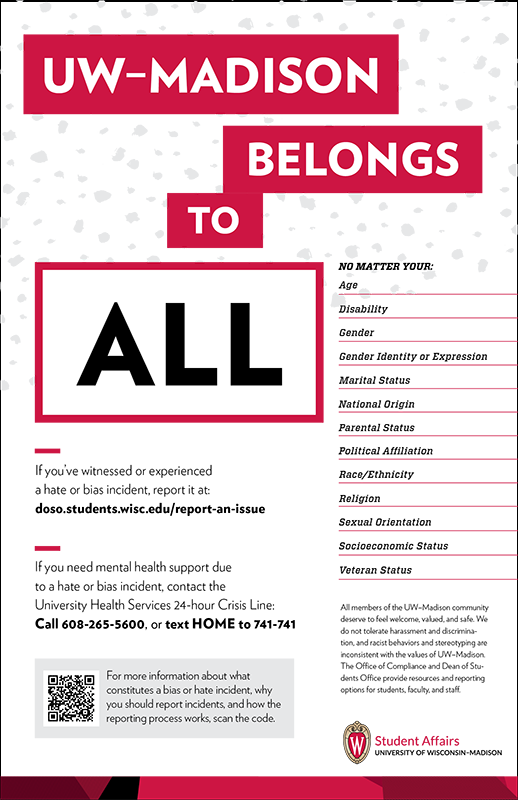 Want to make sure your unit’s use of QR codes follows best practices and helps you stay on brand? Answer the five questions below with your own project. There are exceptions to every rule, but we find if an answer to any of the following questions is “yes,” then we’d recommend reconsidering the use of a QR code.

Does your QR code lead somewhere not optimized for mobile — or your audience?

Remember, people scan QR codes on their phones. So it’s important to lead the audience somewhere navigable on mobile phones. It doesn’t make sense for the destination to be a large poster, a cluttered webpage where the information isn’t easily findable, or simply a repeat of the item on which they scanned the QR code.

We encourage thinking about your audience specifically. For example, in cases where your audience might include those who may not be able or know how to use a QR code, a URL should be provided as an alternate. And don’t forget to add context: “scan here to register!” explains why people are scanning, increasing engagement.

QR codes are best thought of as a physical thing that takes you to a virtual space. That means most QR codes don’t make sense on web, social, or email. People are already on the internet; scanning something actually makes it harder (or impossible) to get people where you want them to go. If you want to direct the audience somewhere else online, simply use a link.

Are any details likely to change?

Many QR codes we see are “static QR codes,” which are sort of a snapshot in time. In other words, once you create and print a static QR code, it can’t be edited. For example, if you find yourself with a broken URL link, there’s nothing you can do but create a new QR code and have your marketing pieces reprinted. Dynamic QR codes, on the other hand, can be edited in real time. The wrinkle here is how to get those created: Adobe Creative Cloud has the means to create dynamic QR codes, and there are some third-party apps and vendors that can create them as well (some for a fee).

Is the QR code inappropriately sized for its placement?

Many sources argue the minimum QR code size for readability on any smartphone is at least 1 x 1 inch (2.5 x 2.5 cm or 115 x 115 pixels). You’ve probably seen codes much larger — or smaller — than that guideline, but it’s really not best practice. Opinions about the look of QR codes vary, but in general their generic, cookie-cutter look can disrupt the aesthetic of the piece you’ve created, undoing your hard work to create a visually pleasing expression of your unit’s identity. Consider your visual identity and the overall look of the piece. Keep the QR code appropriately sized, while still keeping it readable by mobile phones.

Is the QR code likely to go somewhere with spotty/no Wi-Fi access, or a risky area to scan?

Keep in mind where people will be scanning the codes. We’ve seen QR codes on billboards at the side of the road and on moving vehicles, both of which can be dangerous. On the other hand, QR codes are common on posters at places like subway stations, where Wi-Fi  can be spotty (or nonexistent). Some locations on campus see regular traffic bottlenecks (both foot and car!), and others are virtual Wi-Fi dead zones, so give some thought to an optimal location.

There is no official UW–Madison QR code generator, but the following generators are from trusted sources: